Left picture. Structure of TRPV3.  Right picture. Leaves and flowers from a camphor tree, oregano, clove and thyme, which represent natural sources of camphor, carvacrol, eugenol and thymol, compounds that activate the TRP channel TRPV3, are assembled into an ornament representing the structure of TRPV3 reported by Singh et al. Art by Alexander Sobolevsky, idea of Maria Yelshanskaya.

There are six members of vanilloid subfamily of TRP channels (TRPV1-6). Structures of TRPV1-2 and TRPV4-6 have already been solved previously. This paper presents the first structures of TRPV3. TRPV3 is predominantly expressed in skin keratinocytes and is implicated in cutaneous sensation including thermo-sensation, nociception and itch, in addition to maintenance of the skin barrier, wound healing, and hair growth. The dysfunction of TRPV3 channels, often a result of genetic mutations, is associated with numerous human skin diseases including a genodermatosis known as Olmsted syndrome, atopic dermatitis, and rosacea. Furthermore, overexpression of TRPV3 is implicated in the development and progression of colorectal and lung cancer. The gating and regulatory mechanism that we propose, based on our novel TRPV3 structures, will accelerate the development of drugs for the treatment of a variety of devastating diseases. 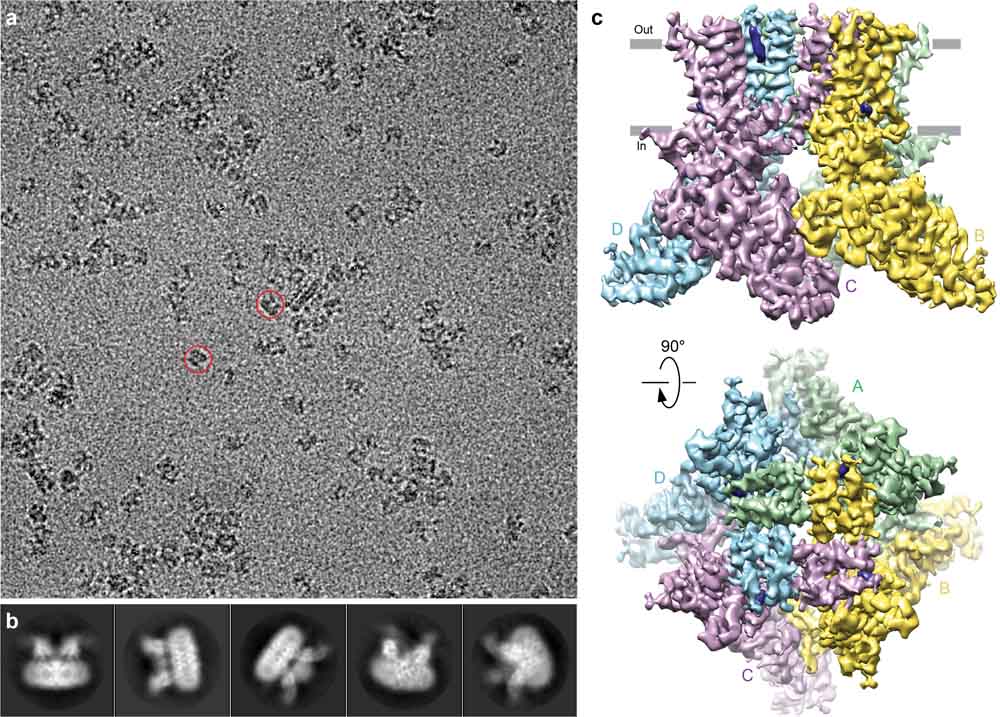 Figure 1. a, Cryo-EM micrograph for TRPV3 with example particles circled in red. b, Reference-free 2D class averages illustrating different particle orientations. c, Side and top views of a 3D reconstruction of TRPV3 in the apo closed state with subunits colored green, yellow, violet and cyan and lipid in purple.To solve the first structures of TRPV3 (Figure 1), we used cryo-electron microscopy (cryo-EM). We imaged mouse TRPV3 both in the presence and absence of 2-APB, a small activating molecule with anti-cancer properties, and were able to capture 3D structures of both open and closed states of TRPV3. The overall architecture of TRPV3 is similar to other TRPV channels. We discovered that 2-APB binds TRPV3 at three distinct allosteric sites distal to the pore. Channel opening is accompanied by conformational changes in both the outer pore and the intracellular gate. The channel gate is formed by the pore-lining S6 helices that undergo a local α-to-π helical transition (similar to TRPV6), elongate, rotate, and splay apart in the open state (Movie 1). In the closed state, the shorter S6 domains are entirely α-helical, expose their non-polar surfaces to the pore, and hydrophobically seal the ion permeation pathway. Our findings further illuminate TRP channel activation and highlight similarities and differences in the gating mechanisms of different TRP channels.