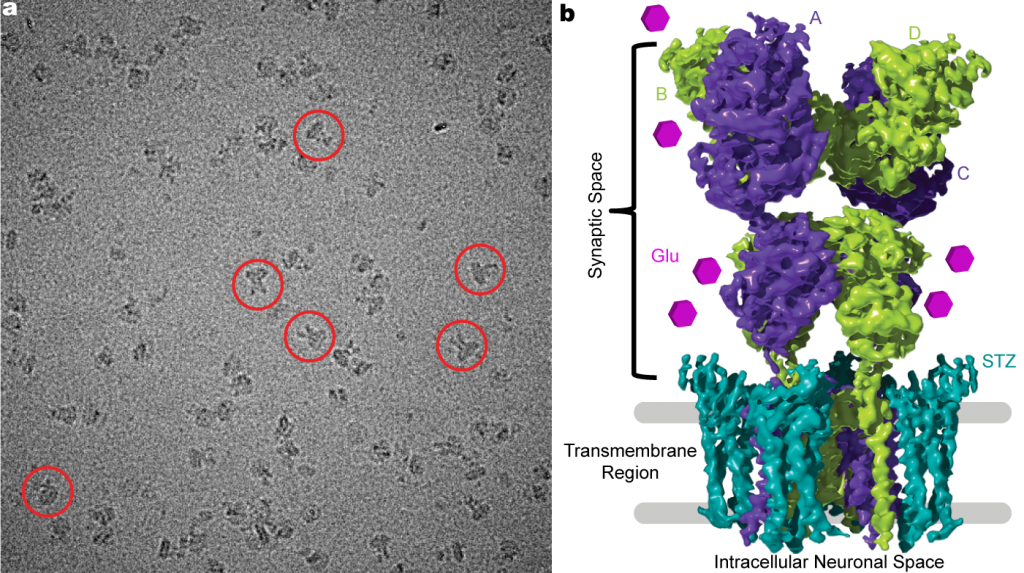 Ionotropic glutamate receptors (iGluRs) are ligand-gated ion channels that mediate the majority of excitatory neurotransmission in the central nervous system, and their dysfunction is associated with neurodegenerative conditions such as Alzheimer’s and Parkinson’s, movement disorders, psychiatric disorders, epilepsy, and stroke-induced trauma. Our interests are primarily in AMPA-subtype iGluRs, which are responsible for the initial post-synaptic depolarization in excitatory neurotransmission. We are particularly focused on the gating process of AMPARs, a process that starts with binding of a ligand to the receptor, and ends with opening of the ion channel pore for the flow of permeant ions. Also of interest is how the function and pharmacology of AMPARs are affected by interactions with their auxiliary regulatory proteins. We aim to provide additional insights into these AMPAR functions in order to understand the pathophysiology of excitatory neurotransmission, a key barrier in informed therapeutic design targeting disease states, using a combination of cryo-electron microscopy (cryo-EM), X-ray crystallography, kinetic modeling, and electrophysiology approaches.

Transient Receptor Potential (TRP) channels are a superfamily of ~28 different ion channels. Some TRP channels gate in response to heat, cold, mechanical force, and/or pungent chemicals, implicating these channels as molecular «sensors» of environmental cues. In addition, TRP channels play important roles in a wide variety of other physiological processes, including calcium homeostasis, neurite outgrowth, and hormone secretion. TRPV6 (pictured above) is a channel found in gut cells that captures calcium ions from the diet. Mutations or changes in TRPV6 gene expression are linked to several cancers and other diseases including hyperparathyroidism, metabolic bone disease, chronic pancreatitis, and kidney stone formation. Advances in structural biology, particularly the “resolution revolution” in cryo-EM, have led to breakthroughs in molecular characterization of TRPV channels. Structures with continuously improving resolution uncover atomic details of TRPV channel interactions with small molecules and protein-binding partners. The characterized binding sites and molecular mechanisms of ligand action create a diversity of druggable targets to aid in the design of new molecules for tuning TRP channel function in disease conditions. We aim to examine TRP channel structure-function mechanisms using a range of biochemical and biophysical approaches, including X-ray crystallography, cryo-EM, and electrophysiology.

Picture above is from review article from our lab — «Ligand-Binding Sites in Vanilloid-Subtype TRP Channels» published in Frontiers of Pharmacology.