Mechanism of calmodulin inactivation of the calcium-selective TRP channel TRPV6

We determined the structures of human and rat TRPV6 in complex with CaM using cryo-electron microscopy (cryo-EM) (Figure 1). The TRPV6-CaM complexes exhibit 1:1 stoichiometry; one TRPV6 tetramer binds both CaM lobes, which adopt a distinct head-to-tail arrangement (Figure 2). The CaM C-terminal lobe plugs the channel through a unique cation-π interaction by inserting the side chain of lysine K115 into a tetra-tryptophan cage (formed by highly conserved tryptophan W583 in human TRPV6 or W582 in rat TRPV6) at the pore’s intracellular entrance. Therefore, K115 of CaM acts as an intracellular ion channel blocker. This unique CaM-channel interaction results in a completely different structural solution to pore closure when compared to pore closure during channel deactivation. 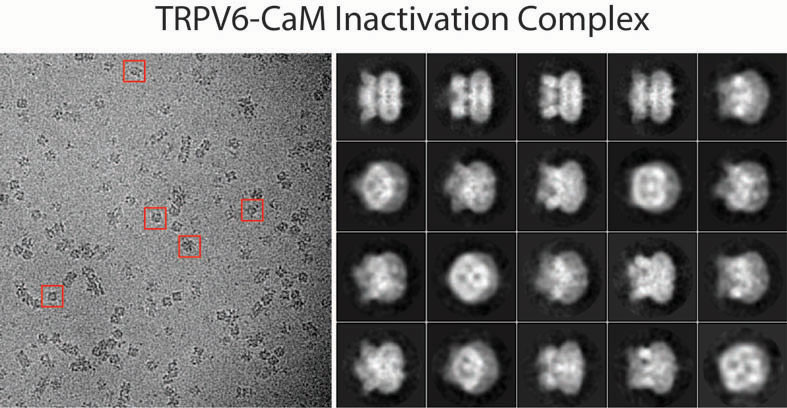 We have shown previously that in the closed state, the pore-forming S6 segments of TRPV6 are a-helical (Saotome et al., 2016). During TRPV6 activation (closed to open state transition), the middle portion of each S6 undergoes a local a-to-p transition at the alanine A566 gating hinge (McGoldrick et al., 2018). As a result of this transition, the lower portion of S6 rotates by ~100°, exposing a different set of residues to the pore in the open and closed states. One of these residues, M578, which projects its side chain into the center of the ion channel pore in the closed state and hydrophobically seals it, creates an activation gate. During deactivation (open to closed state transition), each S6 segment returns to its entirely a-helical form.

In contrast, during inactivation (open to inactivated state transition), each S6 segment maintains an a-to-p transition as in the open state. As a result, the lower portions of S6 segments do not rotate and expose the same residues to the pore as they do in the open state. Instead, the S6 helices tilt towards the center of the pore at the A566 gating hinge (see Figure 3 and Movie 1). Because of the pore constriction, I575, which lines the bottom of the central cavity in the open state, hydrophobically seals the pore, creating its inactivation gate. Interestingly, the tilting of the S6 helices that accompanies inactivation also breaks the Q473-R589 salt bridge that compensates the energetically unfavorable a-to-p transition in S6 upon channel opening. We hypothesize that additional energy needed to compensate the unfavorable a-to-p transition in the inactivated state comes from the cation-p interaction between the tryptophan cage and K115, which functions as an inactivating plug (or an intracellular channel blocker).

Figure 3. Open (left, orange) and inactivated by CaM (right, chartreuse) structures of human TRPV6 viewed parallel to membrane with the front and back subunits of the TRPV6 tetramer removed for clarity. CaM is shown in purple, calcium ions as green spheres and lysine K115 in stick representation.

Since altered expression of TRPV6 is associated with a variety of human diseases, including cancers, the newly discovered mechanism of CaM-dependent Ca2+-induced inactivation of TRPV6 can be explored for therapeutic design.

Movie 1. Structural transition between open (orange) and inactivated by CaM (chartreuse) conformations of TRPV6 upon binding of CaM (purple, calcium ions are shown as green spheres).